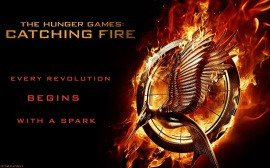 I have been patiently waiting for the movie sequel to The Hunger Games to come out. I was also happy, now that I am through with school, that I was able to finish the book this time before watching Catching Fire on the big screen.

I am always wary when books are adapted for film. More often than not some important aspect of the book is lost and, ultimately, the film is ruined because of this deliberate exclusion. Catching Fire did not have this problem.

The story begins where The Hunger Games left off with Katniss and Peeta’s return home to District 12 after winning the 74th Hunger Games. But things are anything but perfect in the winning circle. Katniss is torn between her feelings for Gale and her “fake” feelings for Peeta, and at the same time she is haunted by memories of the Games, specifically Rue’s death.

On the day of the Victory Tour, President Snow visits Katniss’ home to confront her about her obvious defiance of the Capital’s power allowing her to win the Games. President Snow reveals to her that her actions have caused restlessness, inspiring rebellions within the districts. Threatening her loved ones, President Snow enlists Katniss to placate the districts and put an end to the uprisings during her tour appearances. However, Katniss is unable to sufficiently please President Snow as people continue to support her and the rebellion she has unintentionally come to represent.

It is after the completion of their tour that President Snow announces the 75th Hunger Games, which also happens to be a third Quarter Quell. The Quarter Quell incidentally allows the Capital to introduce a twist into the Games. The twist this year is that all qualifiers will be pulled from previous Games victors , meaning Katniss and Peeta must once again face the horrific violence of the Games for a second time.

There is plenty about this movie that has made it a blockbuster hit. It is full to the brim with an interesting blend of drama and action. The newly introduced victors are adequately cast as the movie exhibits the compelling and charismatic features each character that readers would be familiar with from the book.

Peeta continues to be a touching and honest character that one cannot help but fall in love with. I cannot imagine Katniss’ dilemma as I have become a fan of Peeta’s from the beginning, and the movie does not make this difficult for me to do. Josh Hutcherson is adorable in his portrayal of Peeta. However, this easy-to-love version of Peeta is also distracting. The book Catching Fire is not so straight forward. Katniss’ is torn between Gale and Peeta, a rightly so. Gale is just as admirable in his own right — a man with high beliefs and virtues. The movie fails to capture the enduring back-story between Katniss and Gale. Their budding love is easily overwhelmed by what the film has made prevalent: the two in-love victors of the Games.

My last dispute with an otherwise flawless film is the “forgotten pregnancy.” In the book, Peeta shockingly (and falsly) reveals Katniss is pregnant before the Games. However, in the film this revelation is  forgotten in the arena. Pregnancy in such circumstances would not be easily overlooked with all the killing and excessive physical activity. The book makes sure readers are aware of this impediment, even if it is technically a lie (but a lie the Capital must believe in), by having Peeta and the other victors constantly bringing it up in conversation.

Overall, Catching Fire is worth seeing. Few movies stay as true to the book as this one does, which is a nice change to witness and truly an accomplishment in terms of other book-made-movie flops. And Jennifer Lawrence gives another stellar performance as Katniss, embodying the persona in every imaginable way possible.

Katniss will not be returning to the screen until 2014 with the release of Mockingjay Part 1, and the second part of the movie will not be released until 2015. I am not sure how you feel about a part 1 and 2, but I am certainly tired of this movie trend. If The Lord of the Rings trilogy can be one film each then it can certainly be accomplished with Mockingjay.

Either way I will be in line to see how this revolution will fare against the Capital. Will Katniss rise to the occasion? Will she be able to save Peeta? Gale? Her family? And in the end, which man will win her heart?

I better start reading the Mockingjay to find out… 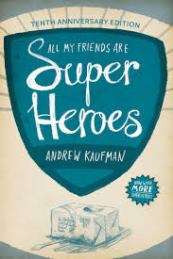 “Each one of these superheroes is special yet common, gifted yet clumsy, triumphant yet sad, simultaneously extraordinary and common. Just like you and just like me.”
— Andrew Kaufman, All My Friends Are Superheroes

I didn’t know of Andrew Kaufman’s celebrated book All My Friends are Super Heroes until I started working in publishing and heard about the publication of its tenth anniversary edition by Coach House Books. The book certainly doesn’t align with the usual titles on my to-read list, but it has now become a welcomed addition to what I have read.Kaufman’s has a varied, and now expanded, list of superheroes that he introduces throughout the book. For example, there’s The Stress Bunny, who has the miraculous cure for everyone else’s stress by absorbing it all into herself. Or The Copycat, who can mimic anyone’s style to the point that the original subject feels like a less successful copy of herself.The story focuses on the relationship between Tom and The Perfectionist (her power is she can quickly organize anything at any given time). Tom, unlike everyone he knows, is not a superhero, but he is perfect for and perfectly in love with The Perfectionist. However, their love goes array on the day of their wedding when Hypno, The Perfectionist’s ex-boyfriend, hypnotizes her to think that Tom has disappeared. After not being able to see Tom for six months straight, The Perfectionist is convinced Tom has abandoned her for good and she must somehow move on with her life. In order to do so, The Perfectionist boards a plane destined for Vancouver. She is completely unaware that Tom, having booked the same flight for himself, is sitting next to her. Now, Tom has only hours to make himself visible to The Perfectionist before he loses her forever.

Essentially, Kaufman’s novella is a love story, but it is also chock full of quirky characters from various spectrums of the human personality. His humorous superhero sections regale us with how some of Toronto’s not-so-special superheroes came to be who they are and what their powers are, which happen to be unexpectedly ordinary. Surprisingly, many of them will remind us either of ourselves or of someone we know.

While I felt Kaufman’s main characters may have deserved more attention to fill them out, there are the entertaining comic book-like illustrations that help propel the action forward, giving Tom and others a face to identify with.

Over all, All My Friends Are Superheroes is a breezy, light-hearted read, and I found myself spontaneously smiling at its simple, yet endearing, presentation of everyday love and life. If you are looking for a fun, quick-read then you should definitely consider this book as an option. The superhero image will be forever changed — in a good way.

There was an error retrieving images from Instagram. An attempt will be remade in a few minutes.

Vintage Fashion, Hair & Beauty and everything in between!

Inspiring dames with a passion for pin up & vintage.

Blogging about vintage fashion for those who share my passion...

A STYLE FILE FOR THE MODERN VINTAGE LOVER

The Blog of Author Tim Ferriss

The art of story.

The Blog of the Vindolanda Field School

One girl's adventures in books, life and travel

Looking for Savvy Readers to talk books with!