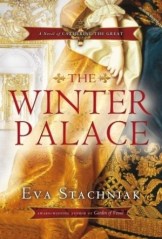 “Behind every great ruler lies a betrayal…”

— The Winter Palace by Eva Stachniak

There are so many myths and misguided perceptions of what the large land mass of eastern Europe consists of. From rumours of a single surviving Romanov to whispers of a Soviet resurgence, Russia is full of mystery…and deception—or at least that is how Eva Stachniak portrays the Russian imperial era in her book The Winter Palace.

With a love for anything and everything to do with Russia ever since my first Russian history course in university, I was naturally very excited to read this book. While it has taken me at least a year to do so since its original release date, I have finally had a chance to read Stachniak’s proclaimed masterpiece.

The book is narrated by Barbara—or Varvara, in Russian—, who is a the daughter of a Polish bookbinder working for the royal Russian family. It is after the death of both her parents that Varvara also comes into the employ of the Empress Elizabeth. Initially, Varvara is simply one of the many seamstresses set to work on Elizabeth’s extensive closet; however, one night, she is discovered by Elizabeth’s chancellor, Count Bestuzhev and under his tutelage, Varvara learns how to become the “eyes and ears” of the Winter Palace, for him and for the empress. Assigned to assist and spy on the Crown Prince Peter, Varvara is introduced to the art of deception and thrust into a world of luxury and debauchery, which is consistently masked by gold, glitter, and fine foods. The Winter Palace is also where Varvara meets the newly arrived Princess Sophie of Anhalt-Zerbst-Dornburg, the Crown Prince’s betrothed. Varvara ends up befriending this German princess, now named Catherine, while Peter ignores his wife-to-be, more interested in playing at war.

Most readers, such as I, would already be aware of the outcome, knowing that Peter is an incompetent ruler and no match for Catherine’s intelligence and diplomatic skill. Therefore, no foreshadowing is necessary to know that Catherine the Great triumphs and takes the Russian throne for herself—a German immigrant now Empress of All the Russias. But while this is the result Stachniak’s novel leads up to, it is not the tale she has decided to tell. Instead, The Winter Palace is an exposé of the palace’s more sinister side, where there are always concealed intruders and easily bribed servants.

Stachniak outdoes herself in setting the scene with layers upon layers of marble, gold, and amber, building the Winter Palace up before the reader’s eyes with remarkable glittery detail. She also brings to life the wide array of foods consumed at the court, which inspired odd cravings, as I found myself lusting for honey-covered cucumbers, Catherine’s favourite snack.

However, while Varvara may be telling the story and Catherine may be strategically planning for ascension to the throne, Stachniak is unable to bring the same intensity she easily provides Empress Elizabeth with. No other character speaks and acts with the same spirit and vitality. Simultaneously, she inspires awe and repulsion, keeping the reader in suspense as Elizabeth moves between kindness and cruelty as easily as time passes from day to night.

Unfortunately, the more I became fascinated with Elizabeth, the less I was convinced by Varvara’s and Catherine’s characters. While Vavara narrates all that is happening, she is also hiding behind this detailing of acts of conspiracy and spying. There is little else to identify her with. Vavara’s secret alliance with Catherine as her confidante also falls short, as the same level of intimacy achieved in the conversations between Varvara and Elizabeth is not translated when she is in closeted conversations with Catherine.

Catherine is aloof and often, disappointingly so, fades into the background. I really would have liked to see more personality from both Varvara and Catherine, rather than having both of them so easily subsumed by Elizabeth’s more eccentric and compelling characterization. It was almost a pity to see her go.

Slow to begin and slow to end, The Winter Palace is a commitment the reader must want to make, as it is only in its middle that the story truly has the potential to grab you, as Varvara navigates her way through the dusty passages of the Winter Palace, listening, learning, and spinning stories to help or to hinder those she’s required to confide in.

Stachniak’s ends the first book of her Catherine the Great trilogy anti-climatically with few reassurances. As time progresses after Catherine’s coup, Varvara becomes disillusioned and unsure of her “friendship” with the new ruler; Catherine’s character remains just as impenetrable as before and this time, the reader is not alone in this deduction.

The Winter Palace, while not being what I had expected, was a delightful read that returned me to Russia in all her imperial glory. However, Stachniak didn’t just allow me to walk the grand halls of the Winter Palace for a second time, she married time and place together in perfect unity, making my memories a living portrait of eighteenth-century Россия, and with her sequel just a little over a week away from its official release date, I am intrigued to see where she will take Catherine’s story and her infamous reign next.

The Winter Palace by Eva Stachniak, published in Canada by Doubleday, © 2012

1 thought on “Honeyed русский whispers: A book review of The Winter Palace by Eva Stachniak”