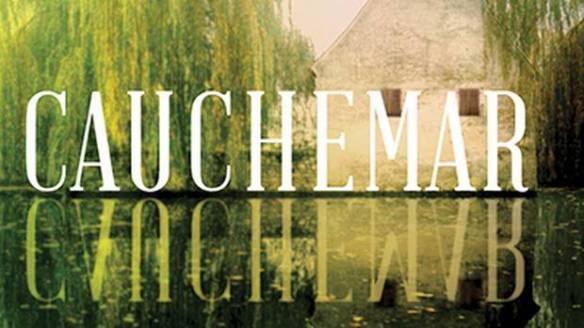 “the veil between worlds is thinner here.”

This review has been a long time in the making, and unfortunately due to life it was delayed. So apologies to ECW Press for being tardy.

Cauchemar is Alexandra Grigorescu’s debut novel, and it revolves around a barely 20-year-old girl named Hannah. The book doesn’t waste much time in announcing that all hell is going to break loose for this character as her sole guardian suddenly dies by means that are mysteriously fishy…and also never quite explained. Alone and living in the Louisiana swamp, Hannah is left adrift. Her prospects look bleak considering that up to this point, she has been home-schooled, she has no friends, and the Louisiana community she lives in have no particular liking for her because of her estranged mother, Christobelle, who has a sinister reputation as a “voodoo Queen,” collecting men like flies who then seem to wilt and wither away in her care—Not exactly the type of woman you introduce as your mother.

Hannah finds some solace when she meets Callum, an easy-going (and apparently easy-to-fall-in-love-with) boat captain and part-time musician. But just when it seems Hannah might be okay in her present situation, the plot barrels into motion. The swamp becomes “the safest, and the most dangerous” place for Hannah to be. But it is when her mother comes back into her life that Hannah has to start facing what she has been sheltered from and denying her whole life: that her nightmares might be more than just nightmares, that the things we imagine going bump in the night actually DO go bump, and that strange phenomenons in nature might just have a supernatural reason behind them. The truth Hannah can’t seem to swallow is just how much of Christobelle and her mysterious ways already reside in her.

I wanted to love this book. The cover, the content, the setting, even the Francophone title that hints at what nightmarish content may be in store for the reader… I was prepared to enjoy it, however, I felt that Cauchemar was a rushed attempt at a first book. The concept was great. I love deep-south superstition, and this book excelled the most when it entered that dreamworld of creepy spirits and elusive white alligators. I was honestly captivated in these moments, chilled by what Hannah saw in her peripheral vision. But it was only in these moments that the plot gained its strength and immediately ended when we rejoined Hannah in the waking world.

Hannah is a very passé character. For being the main protagonist, her agency is lacking. A LOT happens to this poor girl as we find out, but that is the problem. Action is done to Hannah rather than her taking any. While the reader should obviously care what happens to her, I was more intrigued by Sarah Anne, Hannah’s estranged childhood friend. Her character certainly packed a bigger punch than Hannah’s.

As I mentioned, Grigorescu’s gothic storytelling successfully creeped me out at times, and I congratulate her on that her ability to write in a subtle and haunting manner. It is truly hard to make a reader’s skin crawl in a world as desensitized as ours. But the characters and the overall plot was all very two-dimensional. The one thing I take issue with the most is I didn’t believe in Callum and Hannah’s love. Once again, Grigorescu rushed things here. It was too fast! Even before the supernatural started to impact their relationship, their love for each other felt like a piece of flimsy cardboard, and even their love-making felt forced. I love a good love story (there’s A LOT of ‘loves’ going on in this paragraph, sorry), so if I’m not convinced, a book can be easily ruined for me.

In the end, Cauchemar is a bit of a mystery to me. It left too many questions that shouldn’t have to wait for a sequel to be answered, but with the ambiguous twist at the end, readers can likely expect there to be one—I just hope it also includes some plot development.

Advanced Readers copy provided to me by ECW Press.