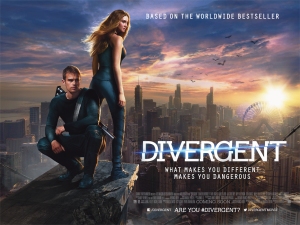 There was a fair amount of excitement surrounding the release of Divergent as a movie. It was supposed to be the next Hunger Games. I didn’t hold any high hopes for the film to begin with but besides the sexy casting of Theo James as the moody and mysterious character Four, the movie fell short of any expectations I could have raised to begin with.

Shailene Woodley, however, did live up to my expectations. My first experience with Woodley’s acting skills was in The Secret Life of an American Teenager. I was willing to blame the script, but watching Divergent confirmed for me that Woodley still has a long way to go before she impresses me. She is very wooden in her portrayal of Tris. Even her soliloquies were cliché and dry to the very end, pointing out the obvious, which is highly aggravating. Jennifer Lawrence as Katniss succeeds where Shaileen fails. Lawrence as Katniss evokes a response from the audience. You grow with her, feel with her. That connection never happens with Tris. Overall, I failed to see Tris develop as a character in the same way that she does in the book, and this is mainly due to Woodley’s limited supply of emotions (I will add that Woodley’s acting is heading in the right direction now since her role in the film The Fault in Our Stars).

There is also a lack of chemistry visible between Tris and Four. Theo James and Woodley just don’t have the same on-screen presence that Katniss has with Peeta or Gale. You can feel the tension, the confusion, the desire. In Divergent, these emotions look forced and muted between Tris and Four, and any effect their relationship could have on the audience is lost. Frankly, I just wanted Theo James to myself, as I can’t root for a romance I don’t believe in.

However, Woodley wasn’t the main issue with the movie Divergent. While changes that were made in The Hunger Games movie worked well, the changes made in Divergent were to its detriment. For example, the plot felt very much staged when Tris’ mom came to visit her. Instead of coming on “visiting day” like she does in the book, she shows up randomly and is somehow not spotted by the Dauntless guards who are EVERYWHERE. And I’m sorry, but that ending was not worthy of a twenty-first century film. It resembled more of the old movie endings we giggle at with its very pointed heroic quips that shouldn’t be said aloud, especially not these days. Needless to say, there were a lot of unbelievable moments for me in the movie.

Usually I will fight tooth and nail to support a movie my boyfriend dislikes and I have forced him to watch, but this time I agreed with him. I’d rather reread the book (and I rarely reread anything due to my large stacks of unread books waiting for me) then watch Divergent for a second time. I can’t say I’m looking forward to the sequel.

On a happier note, who’s excited for Catching Fire this November? ME!!!!!

Vintage Fashion, Hair & Beauty and everything in between!

Inspiring dames with a passion for pin up & vintage.

Blogging about vintage fashion for those who share my passion...

A STYLE FILE FOR THE MODERN VINTAGE LOVER

The Blog of Author Tim Ferriss

The art of story.

The Blog of the Vindolanda Field School

One girl's adventures in books, life and travel

Looking for Savvy Readers to talk books with!